Moor Pond Woods is the site of a system of reservoirs and channels (called leats.), constructed in the eighteenth century by the Robinson family to serve their extensive cotton processing activities along the Leen valley. North of Linby Lane was a reservoir called Upper Pond (also known as Papplewick Dam). Moor Pond was between Linby Lane and Papplewick Lane, and a third reservoir was between Papplewick Lane and Grange Cottages. Water was taken from the River Leen and fed into the ponds along a series of ‘leats’. Water from the ponds was released, when required, to feed the waterwheels at Castle Mill and Grange Mill. A historical review of the mills is found elsewhere in the website. 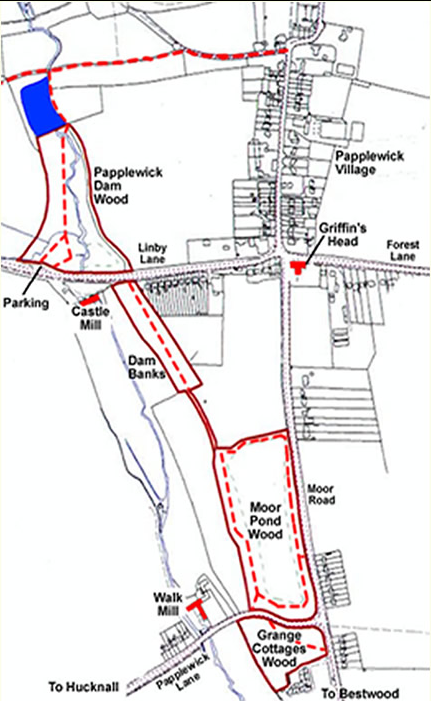 The site of the Moor Pond Woods project lies to the west and southwest of Papplewick village in Nottinghamshire. The site is divided by the B6011 (Linby Lane, Papplewick) and Papplewick Lane, Hucknall, into 3 blocks, a total of 7.2 hectares. It stretches a mile from Papplewick Dam Wood in the north, through Dam Banks and Moor Pond Wood to Grange Cottages Wood in the south. The location is north and northwest of postcode NG15 8EP (OS Explorer map sheet 270 (SK 54.50))

Since cotton refining finished in 1828, the site has slowly returned to nature. The woodland is a designated local wildlife site, with mature ash, oak and chestnut trees. There are more than twenty species of bird regularly observed, along with bats, crayfish, water voles and a rich assemblage of invertebrates. As well as the pond and the woodland there is an extensive area of wetland.

The site is owned by the Co-operative Society and managed by Nottinghamshire County Council’s Conservation Service to allow public access. In consultation with the ‘Friends of Moor Pond Woods’, they help to maintain the wildlife interest and maintain the footpaths for local walkers.

In 1999, the Parish Council decided to develop the site for local people, and mark the millennium by creating a valuable permanent resource for the parish. The Council identified three themes, which remain at the core of the project:

Support for the proposals was gained from the ‘Corridors to the Countryside Group’, a local collective of organisations interested in the management of access and wildlife corridors situated near Nottingham’s rivers. Organisations represented include the County, City and District Councils, the Environment Agency, the Countryside Agency, the British Trust for Conservation Volunteers and the Greenwood Partnership team.

Funding for the project, has been phased over several years. The group raised over £120,000 of investment in the first 10 years, and has continued to seek support from a range of sources. This has included